The Great Central Bank Pivot is now underway around the globe, but it’s not the one Wall Street has been praying for. Instead of another round of easing juice to brake the obvious fall in economic activity, central banks en masse are racing to goose interest rates by 75 or even 100 basis points at a clip in order to quash the inflation surge.

Just yesterday, for instance, the heretofore dovish Riksbank of Sweden raised its target rate by 100 basis points, shocking the market. Not that long ago, by contrast, the Swedish central bank appeared to be locking into zero interest rate (ZIRP) policy forever.

That’s right. The Swedish inflation rate has been accelerating at a hellish pace, but until yesterday the central bank was complacently sitting on essentially a zero rate policy, thereby giving the notion of being “behind the curve” an altogether new definition.

Moreover, this inflation acceleration wasn’t the result of just energy or other exogenous pressures arising from global markets. As one analytical service explained, Sweden’s inflation surge is broadly based across most sectors:

The Riksbank’s action, therefore, is symptomatic. Global central banks have been chasing the chimera of “lowflation” for years now. So doing, they flooded the financial markets with massive amounts of excess liquidity and credit, while getting further and further behind the curve on the inflation that was implicitly building in the system.

As a reminder, the combined balance sheets of the world’s central banks stood at $4.7 trillion in 2003 and now total nearly $43 trillion. That gusher of liquidity, in turn, set the monetary table for soaring inflation–first in financial asset prices, and now in goods and services owing to commodity market disruptions triggered by Washington/NATO’s unhinged Sanctions War against Russia and the Covid-induced ructions in the global supply chains.

So central banks have pivoted nearly on a dime, switching from stimulating more inflation to a desperate attempt to quell inflationary pressures that are fast becoming embedded in the wage cost structure.

Indeed, that was the heart of the Riksbank’s shocking 100 basis point rate increase:

…..“It would be even more painful for the Swedish economy if inflation were to remain at the current high levels,” officials said. “By raising the policy rate more now, the risk of high inflation in the longer term is reduced and thereby the need for an even greater monetary tightening further ahead.”

The above rationale is the essential mantra of all the central banks including the Fed. Until they have definitive evidence that wage-cost pressures are abating, they will keep on increasing rates. After all, like the proverbial carpenter, when your only tool is a hammer, you keep on pounding the nail.

In the case of the Riksbank’s leading action, in fact, there was a further straw in the wind. To wit, unlike the Fed, the ECB and other behind-the-curve central banks now hitting the brakes, Sweden’s central bank also predicted that next year would bring an outright recession:

The Riksbank cut all its growth forecasts, and now expects the Swedish economy to contract 0.7% next year instead of expanding by that amount.

Of course, there is always one actor that doesn’t get the message—in this case it is the monetary basket case known as the BOJ (Bank of Japan). It is still sticking to its insane commitment to “yield curve control”, meaning that it will buy unlimited amounts of government debt in order to keep the 10-year bond rate pegged at the ridiculous level of 0.25%.

But the BOJ’s obstinance is not actually an outlier or aberration. To the contrary, it is symptomatic of where all the world’s Keynesian dominated central banks were just a few months ago: That is, hung up on the wrong-headed notion that the trend level of inflation was too low because the indices were coming in below their sacred 2.00% targets.

Now, however, even Japan’s CPI is surging. Thus, Bloomberg today noted that,

Japan’s inflation quickened to the fastest pace in over three decades excluding tax-hike distortions, creating headaches for the central bank this week as it seeks to explain why it needs to continue with monetary stimulus when inflation is far above its 2% goal.

Nevertheless, BOJ head Kuroda and his parrots in the financial markets actually believe that Japan’s underlying inflation is still too low, and that the BOJ should keep on pumping massive amount of fiat credit into the system until central bankers conclude that inflation has reached the sacrosanct 2.00% target on sustainable basis.

“The current cost-push inflation is bad for consumers, but the BOJ will keep easing, hoping it’ll eventually turn into positive inflation,” said economist Yuichi Kodama at Meiji Yasuda Research Institute. “The central bank’s policy won’t change until Kuroda’s term ends as this is the last, big opportunity for Kuroda to truly revive inflation”.

In the last four bolded words you have the true ailment of the present era. The monetary central planners got hooked on the absurd notion that the job of central banks is to make more inflation. Even 25 years ago the very notion would have been laughed out of town—even by Keynesian economists.

But groupthink is a contagious thing, and during the last two decades it has thoroughly infected every one of the world’s significant central banks. Consequently, unhinged money-pumping has gone far beyond anything previously imagined.

What that means, of course, is that taming this round of global inflation is a wholly new ball game. The coming financial and economic carnage, therefore, will make even Volcker’s crushing of inflation speculators four decades ago seem like a Sunday School picnic.

For want of doubt, just consider how rapidly interest rates are rising with no slowing of the inflation momentum yet visible. Yesterday, the two-year yield, which is much more sensitive to near-term interest rate expectations, climbed to 3.946%, its highest settle since 2007.

More importantly, the chart below makes evident that the government debt traders are now way out in front of the sleepwalkers at the Eccles Building. That is, the two-year  treasury note has risen nearly 400 basis points from its Covid-low compared to just 215 basis points for the Fed funds rate.

Stated differently, the bond traders are waking up from their multi-decade slumber. The Fed “put” under the bond market, otherwise known as quantitative easing (QE), is no more, even as it launches $95 billion per month of bond-selling (QT) in its desperate effort to wrestle inflation to the ground.

What is striking about the chart below, however, is the speed and amplitude by which the previously somnolent 2-year note market adjusted to the real central bank pivot now underway. And there is a lot more of that to come.

Accordingly, soaring interest rates in an awakened and un-pegged bond market is what is actually coming down the pike. In an economy burdened with $88 trillion of public and private debt that’s surely a recipe for carnage.

Likewise, the yield on the 10-year U.S. Treasury note is coming to life as well. Yesterday it rose to 3.489%–its highest settlement level since 2011, and up from 3.447% on Friday. But that was just a warm-up for today when the 10-year benchmark broke out of its trading range, breaking above 3.60% at its high.

Needless to say, there is still a long way to go in order to get the government’s benchmark security back to a yield that is in sustainable territory in real (inflation-adjusted) terms.  In turn, that means big time trouble for the stock market, even on a technical basis.

Those numbers mark the lowest share since 2006, and yet the Fed’s inflation-battle is just getting started.

To be sure, the perma-bulls are not yet ready to give up the ghost, and are relentlessly ingenious when it comes to spotting false evidence that inflation is turning the corner and that the Fed will soon be free to revert to the money-pumping modality of the last three decades.

But we’d say not so fast. Inflation is a complex, multi-vectored phenomena. Just because monthly numbers can always be cherry-picked which imply inflationary pressures are abating, that doesn’t mean that the battle has been won.

For instance, a new canard is that rising rental rates are finally abating, owing to the recent sharp weakening of the housing market. As shown by the blue bars below, the monthly rate of change is still very high by the standards of recent history, but it is down significantly from the peak levels of last fall. 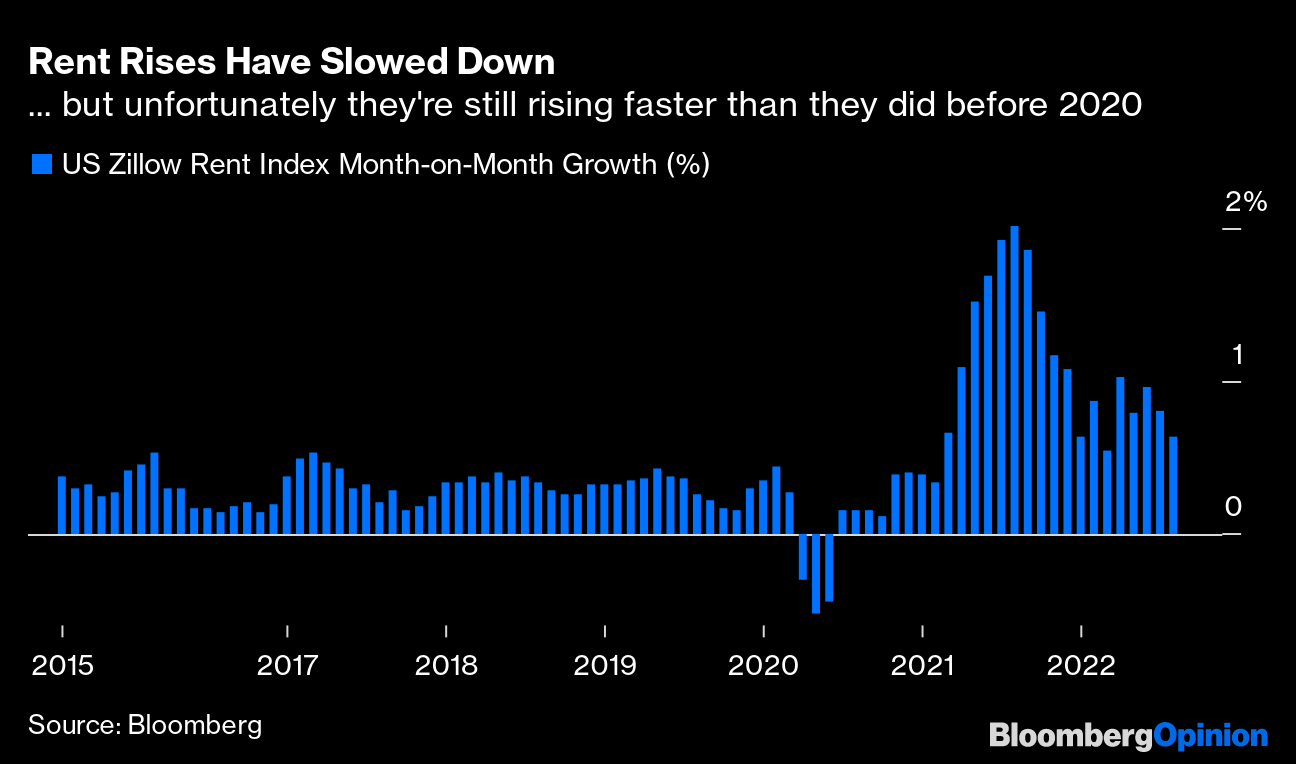 True enough. But the problem is that all of those soaring blue bars on the right-hand side of the chart are cumulative. Actual households are now facing annual rent increases that are more than double those of the recent past on a Y/Y basis.

It is these big bites out of paychecks which have sent wage demands soaring, thereby fueling the wage-cost-price spiral that now has a strong head of steam. And it is the spiral, in turn, which will prolong the period of high inflation and keep the Fed’s feet firmly on the monetary brakes.

As it happens, the Fed should follow the Swedish example tomorrow and go the full monte at 100 basis points. We don’t think they have the gumption, of course, but that actually makes no never mind.

Sooner or later, interest rates will have to reach levels that restore real, after-inflation returns to actually investors, as opposed to the central bank fiat credit issuers who have cleared the market at false levels for years.

And that’s the real meaning of the Great Central Bank Pivot.

The exact reason the financial elite continue to get richer grabbing more power…all while everyday folks struggle to live their daily lives.

We Track the Dollar Collapse For You!