There is nothing sadder than watching those who inspired you on your journey into contrarianism degenerate into mummified shills for a morally bankrupt status quo. Buffett and Munger pillory Bitcoin and rationalize Cantillon mercantilism at Berkshire AGM.

by Mark Jeftovic on Bombthrower.com:

The Berkshire-Hathaway AGM was this past Saturday, and Warren Buffett and Charlie Munger didn’t sugarcoat their animus toward Bitcoin, saying

“Whether it goes up or down in the next year, or five or 10 years, I don’t know. But the one thing I’m pretty sure of is that it doesn’t produce anything,”

Munger went further, calling it evil, ultimately headed for zero and a problem “because it undermines The Fed”.

Obviously, Buffett and Munger are hitting back at the hordes of laser-eyed barbarians for being labeled part of The Gerontocracy by Peter Thiel at his keynote address to Bitcoin2022 in Miami (I was there, it was epic).

The AGM happened after I had already sent the month-end Crypto Capitalist Letter to the editors so it was too late to cover it there.

It does warrant some comment, because there’s arguably some cognitive dissonance: The Crypto Capitalist covers publicly traded crypto companies. We don’t do technical analysis, we don’t do charting or Elliot Waves anything like that. Buffett is the patron saint of value investing, and I got into crypto stocks because I saw them as value stocks. For real.

The year was 2020, the world had completely lost its shit overreacting to a not-cataclysmic COVID pandemic, our brilliant (unelected) technocrats imposed lockdowns across the entire world and so, like many people, I decided to use my time as productively as possible, deciding to double-down on my investment education. Loading up on books like The Joy of Compounding, The Book of Value and listening to endless Value After Hours podcasts (love that show), I  started combing through nanocap and microcaps looking for value plays.

I’d always been value oriented. I’ve got the Warren Buffett shareholder letters, dog-eared and underlined from several passthroughs. I’ve got two copies of Bevelin’s “Seeking Wisdom from Darwin to Munger” because one of them is signed by Munger and I wanted another copy to mark up and underline. Despite everything I’m about to say about Buffett and Munger, I’m still currently reading Adam J Mead’s Complete Financial History of Berkshire Hathaway. It’s fascinating stuff.

Over the course of immersing myself in the craft of value investing during lockdowns it turned out I kept finding it in a peculiar place: crypto stocks. With Bitcoin hitting all time highs, you would expect all the crypto stocks to be screaming higher at expanding multiples to nosebleed levels even more extreme than the underlying cryptos themselves. You see this in gold bull markets, in fact gold stocks typically lead the metal (both on the way up and the on the way down).

Not so in cryptos. At least not in the latter half of 2020. With Bitcoin, Ethereum and everything else ripping higher to fresh all-time highs, I was finding Bitcoin miners who were trading for less than the value of the Bitcoin on their balance sheet, with no debt. That would make them honest-to-God Ben Graham style net/nets.

It just seemed very asymmetric so I started loading up on names like Hut8, Hive, Bitfarms, Fortress Technologies (now Cathedra), Neptune Digital and this tiny little crypto-conglomerate nobody was paying attention to called Galaxy Digital.  There were a couple of stinkers in there too, but overall it didn’t really make a difference. I was finding genuine value in an entirely new and ascendent asset class. Buffett would be proud! Wouldn’t he?

Buffett and Munger loathe Bitcoin. If Bitcoin is “digital gold” (it is), Buffett has never liked gold either. There was a lot of excitement in goldbug circles when a Berkshire-Hathaway 13-F revealed they had bought a chunk of Barrick. The BRK-fanboys dissected the trade religiously and wondered out loud if that was an actual Buffett trade or one of the inner-circle who were being groomed for succession.

It didn’t matter, because barely a year later, Berkshire had exited the trade anyway.

Yet they have also been known historically for steering clear of tech in general (despite now holding numerous tech investments which they entered far later in the respective companie’s lifespans).

Buy it now, or buy it later

Back in the dotcom boom, Buffett famously avoided tech stocks because he deemed them outside his circle of competence. He was ridiculed at the time as being out of touch, but he was eventually vindicated when the dotCom bubble imploded. Still, he could have bought Apple for a song in the wreckage, at (split adjusted ) prices ranging from under $1 to $2.50 or so up until mid-2006. It wasn’t until 2016 that Berkshire Hathaway backed up the truck and loaded up around the $100/share mark (pre 2020 split). By the end of 2021 nearly 40% of Berkshire’s portfolio was Apple!

But Apple wasn’t by any means the first transformative tech company Buffett eschewed at first. In 1968 Bob Noyce, was leaving Fairfield Semiconductor to start a new company Integrated Electronics and was raising an initial $2.5M seed round. Both Buffett and Noyce were trustees for Grinnell College’s endowment fund. Buffett signed off on an investment for the college, but declined to put any of Buffett Partnership’s capital into “Intel”. He wouldn’t be invested in the behemoth until 2011, and even then, he was out within a year.

Despite the general aversion to the tech sector, Buffett never called integrated circuits, personal computing or the internet “rat poison”.

I believe the reason for the visceral hatred toward monetary assets, like gold or Bitcoin is because on some subconscious level, Buffett knows that one of the major tailwinds of his stellar investment career has been the destruction of the monetary base layer and The Cantillon Effect.

Buffett and Munger’s belief is that the only reason for owning gold (or now Bitcoin) is in the hope of selling it to somebody at a higher price in the future. Yet, in Buffett’s own words, he likes to own businesses he understands when he

“like[s] the price at which they’re selling relative to their future prospects, and thinks 10 years from now that they’ll be worth more money”

There is a strange kind of tunnel vision here. All investment seeks to either preserve or accumulate wealth, and everybody does a variation of the same thing: deploying capital where they feel will hold or gain value in the future.

Buffet, who’s “favourite holding time is ‘forever’” should perhaps think more deeply around why he would rather hold his wealth in productive businesses rather than unproductive gold, or even the ostensibly risk-free asset that is cash.

“By this means the government may secretly and unobserved, confiscate the wealth of the people, and not one man in a million will detect the theft.”

Buffett is of those men, saying:

The most important word in this sentence is “almost”. Inflation swindles (steals, defrauds) almost everybody. But there are a few people whom inflation doesn’t rob, but actually enriches. Those people are Cantillionaires. Buffett and Munger, as skilled as they may be in investing,  belong to the Cantillionaire class.

Richard Cantillion, the British entrepreneur who wrote one of the earliest economic treatise was the first to formalize how expanding the money supply is experienced in two different ways within an economy:

The elites who have direct proximity to the new money experience it as rising asset prices, making them wealthier, and giving them the ability to further compound their wealth by buying up even more of society’s assets. 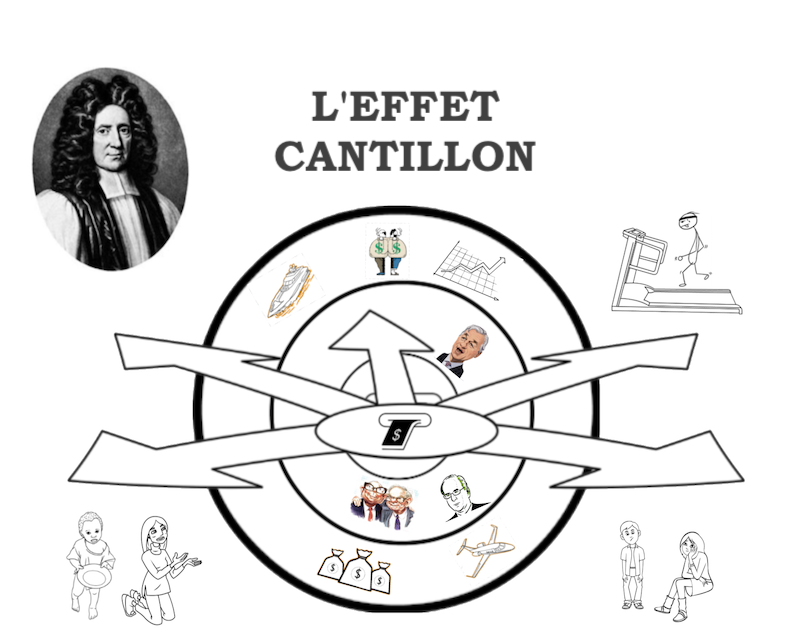 Everybody else, the plebes, the rabble, the permanent underclass, they don’t experience it as rising asset prices, because they can’t afford to acquire any assets. They live on a permanent treadmill that keeps accelerating while the incline constantly increases… Euphemistically characterized by policy makers as “inflation”.

When you see the picture that lays out how the dynamics of Cantillon Mercantilism works, it makes more sense why the uber-wealthy like Munger and Buffett might rationalize hard money assets such as gold as “unproductive” and Bitcoin as “rat poison”. It’s because that magic money printer at the center of their world can’t print hard assets.

But it can and does print cash which even though they know it decays, and the more the machine prints the faster it decays, they also know that they’re first in line to get it.  That means they can use it to inflate the value of their own assets before it hits the outer fringes society where it inflates the cost of staying alive.

In the 2008 Global Financial Crisis: Berkshire-Hathaway didn’t receive bailouts directly, but at least four of their holdings did, to the tune of nearly $100 Billion USD (Wells Fargo, American Express, Bank of America, and Goldman Sachs).

During the COVID Panic: The Fed directly purchased Berkshire-Hathaway bonds (along with those of numerous other companies, all of whom were worth over $100 Billion USD).

Bitcoin, when widely adapted as money and a store of value puts an end to the Cantillon Effect. Because it is an inelastic, deflationary and asset based money, it gains purchasing power over time (volatility aside, which I expect to smooth out over the coming years).

For those who feel running an economy on deflationary, inelastic money is impossible I would suggest reading, Nik Bhatia’s Layered Money, Saifedean Ammous’ The Bitcoin Standard, or Detlev Schlichter’s Paper Money Collapse first edition of which came out before Bitcoin was barely on anybody’s radar (2011).

There is no barrier to entry for asset accumulation with Bitcoin, because you can start with a microscopic amount and watch it gain purchasing power over time. It enables savings and capital formation.

Ordinarily, enlightened capitalists like Buffett and Munger should be on board with this. But they instead recoil from it with every fibre of their being. Perhaps, without being consciously aware of it, they understand on some level that  Bitcoin presents a direct assault on Cantillion Mercantilism.

On the surface, Munger and Buffett bring living example to the famous Upton Sinclair quote: “It is impossible to get a man to understand something whose livelihood depends on them not understanding it”

However, being as they are among the few who recognize inflation for what it is (wealth destruction for everybody else, asset compounding lubricant for themselves), they probably understand Bitcoin more than most no-coiners, and what it represents.

What amplifies the dissonance around their posture toward crypto-currencies is that this is one of the few sectors of genuine value in the equities markets right now. In other words, right now, in Q2 2022, crypto stocks are value stocks. Granted, it’s been widely acknowledged that Buffett (and Berkshire) ceased being value investors a long time ago, optimizing more for “growth at a reasonable price”. It’s hard to find value at the scale BRK operates at.

Were Buffett to retrench to his value roots he could buy up Galaxy Digital ($4.6B), Silvergate Bank ($4B) and Coinbase ($30B) and still not really move the needle. This shows just how early it still is in the Bitcoin and crypto story.

Size matters, and sometimes not in a good way: BRK’s outperformance has been in secular decline for decades…. 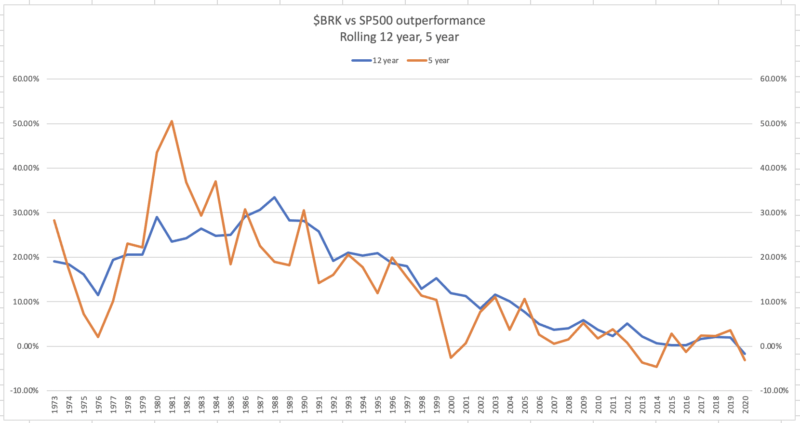 It would be fair play should the likes of Buffett and Munger simply dismiss crypto-currencies as outside their circle of competence thus uninvestable for them. They’ve done that continually throughout their career and it has served them well and been a great lesson in discipline for all aspiring investors.

Maybe, on the other hand they understand it all too well.